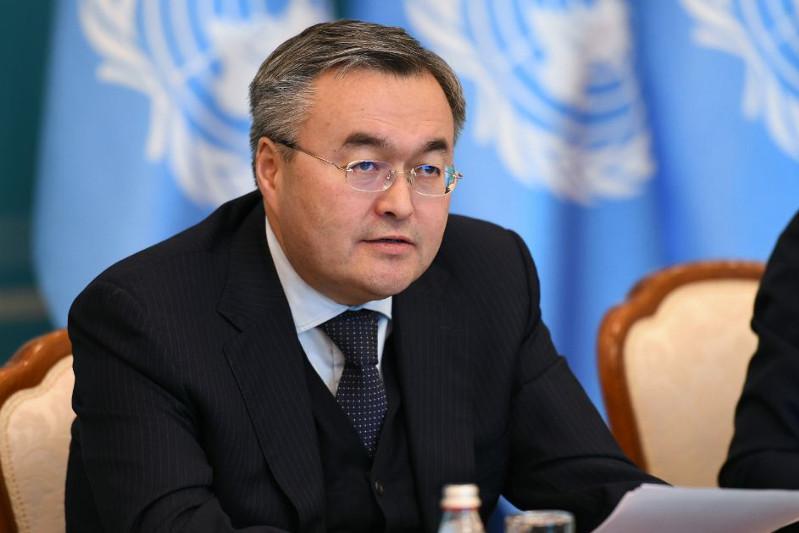 NUR-SULTAN. KAZINFORM A briefing with the participation of the UN representatives was held today in the Ministry of Foreign Affairs, Kazinform reports.

Minister Mukhtar Tleuberdi informed mass media about the role of Kazakhstan in the UN.

«The cooperation with the UN remains a priority for our foreign policy. Throughout 27 years of multilateral cooperation, Kazakhstan and the UN have built a strong partnership. Kazakhstan has joined more than 100 treaties and conventions of the UN and deployed 19 UN programme offices and institutions. The high level of our cooperation is reflected in 12 visits of our presidents to the UN Headquarters in New York including the recent participation of President Kassym-Jomart Tokayev in the 74th session of the UN GA and 4 visits of the UN Secretary General to Kazakhstan,» Mukhtar Tleuberdi said.

He reminded of the key initiatives of Kazakhstan inspired by a sincere belief in the power of collective adoption of decisions and dialogue based on the UN Charter.

« In his first address to the UN General Assembly, Elbasy Nursultan Nazarbayev initiated to convene the Conference on Interaction and Confidence-Building Measures in Asia. Since then, the CICA has proved its relevance as a platform for collective approaches in settlement of security problems. During our chairmanship in the CICA in 2020, we will do our best to transform the CICA into a full-fledged regional organization in the field of security and development. The role of Kazakhstan as a geographical and political bridge between Europe and Asia, north and south is determined both by its involvement in global regional processes and its desire and opportunity to mediate and strengthen trust,» the Minister stressed.

As the speaker noted, the meetings on Iran’s nuclear programme held in Almaty and the Astana Process on Syria prove that wide recognition of Kazakhstan’s mediation efforts.

«Our role as a decisive adherer of multilateral approach is reflected in three areas of the UN’s work: peace and security, development and human rights,» he concluded.