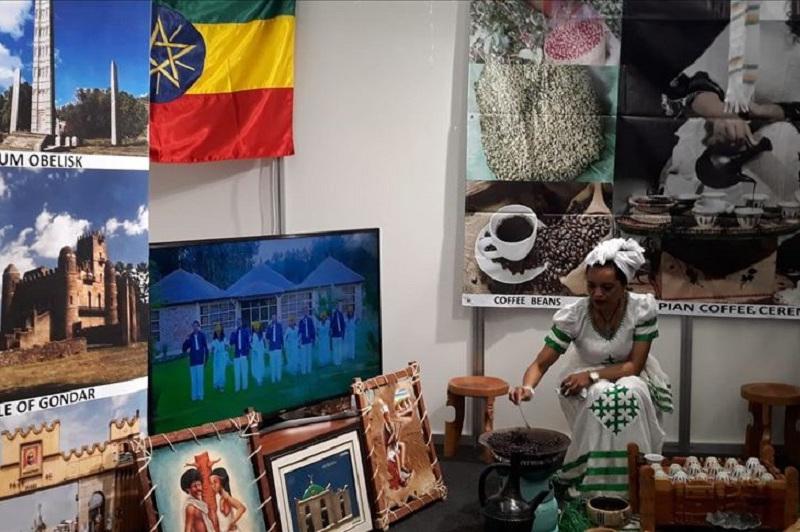 ANKARA. KAZINFORM - An Ethiopian coffee booth was crowded with visitors during a four-day tourism and travel expo at the ATO Congresium in Turkey's capital, Anadolu reports.

Turks and international visitors were impressed when they sampled the traditionally brewed Arabica beans.

The venue was filled with booths representing various countries, travel and tour companies and antique merchants during the event, which ran from Nov. 14-17.

«It reminds me of Mirra coffee from Turkey,» said Mustafa Incekoy, one of the Turkish visitors to the expo.

Mirra is a unique type of coffee made with a special brewing method that is typical to the southeast Anatolian provinces such as Mardin and Sanliurfa. According to Incekoy, Mirra coffee is known for its concentration and strong taste.

Beyza Kazdal, another visitor, was curious to learn what Ethiopian coffee tasted like. After trying it, she shared Incekoy’s sentiments about its strength.

Unlike conventional coffee brewing styles, Ethiopian coffee has its own cultural ceremony and special gadgets for brewing it.

Around 1,000 years ago, a goat herder spotted his goats hopping and jumping after chewing mysterious coffee leaves in the southeastern highlands of Ethiopia at a place named Keffa, where the name of the coffee is derived from.

Khadija Ali, one of the presenters at the Ethiopian stand, said it was nice to see Turks excited about the coffee.

Ethiopians in Ankara were also part of the program. Besides their visit, they were creating an attractive vibe with their cultural attire and dances. Most said they feel at home here in Turkey especially in such programs.

In Ethiopia, coffee is not served as a drink only. Rather, it symbolizes gathering, unity and family. When coffee is served there, people learn what is going on in their surroundings.

Yahya Girma has been living in Turkey for the past three years. He said he longs for his family while drinking coffee.

«I always used to see neighbors gathering around my mom as she brewed the coffee, sharing what was going on around the village, who was well and who was not,» he added.

Coffee is a major export commodity for Ethiopia, covering around 34% of the country's total exports, according to Ethiopian customs and revenue reports. Ethiopia is also the biggest coffee exporter in Africa.