EU presents «Letter from Nur-Sultan» together with the Carnegie Europe 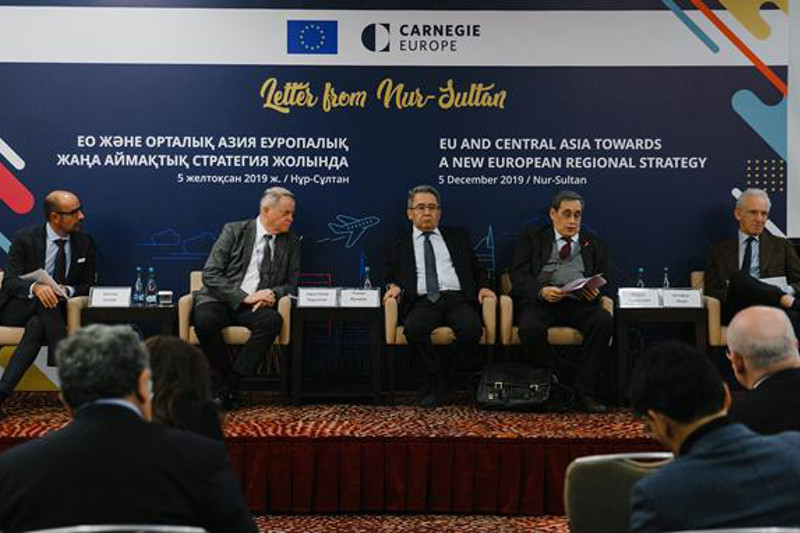 NUR-SULTAN. KAZINFORM Today the Kazakh capital hosted the presentation of the so-called «Letter from Nur-Sultan».

The event organized by the European Union Delegation to Kazakhstan in cooperation with the Carnegie Europe Center provided a unique opportunity to discuss the key issues of the EU-Kazakhstan and the EU-Central Asia relations. The «Letter from Nur-Sultan» is part of the Capitals Series by the Carnegie Europe and is the first such publication on the Central Asian region. The Letter itself was prepared by a well-known Kazakhstani expert, political scientist, Chief Research Fellow of the Kazakhstan Institute for Strategic Studies under the President of the Republic of Kazakhstan, Dr Murat Laumulin, the official website of the EU Delegation to Kazakhstan reads.

EU Ambassador to Kazakhstan Sven-Olov Carlsson noted: «The EU's partnership with the region is not directed against anyone. Kazakhstan and the other Central Asian countries appreciate our ability to engage on a non-exclusive basis without imposing binary choices. The EU does not aim to be a »Great Game« player on a »Grand Chessboard« but rather a reliable and committed partner for the region. We remain open for cooperation and synergies with everyone, including China and Russia, based on full transparency and fully respecting the Central Asian states' ownership and sovereignty.»

The event was also attended by Visiting Scholar of the Carnegie Europe Dr Stefan Lehne, Ambassador of Austria to Kazakhstan Mr Gerhard Sailler, Director of the MFA Foreign Policy Analysis and Forecasting Department Talgat Kaliyev, as well as by prominent Kazakhstani experts, representatives of the academia and diplomatic corps.

«The EU needs more assertive strategy. This would entail shifting from a simple, general dialogue with the target country, based on ideas and principles, to a more meaningful dialogue based on explicit criteria for implementing those ideas and principles. Still, the EU should be lauded for successfully negotiating the Enhanced Partnership and Cooperation Agreement with Kazakhstan. What’s needed now by Brussels and Nur-Sultan is implementing it. The Central Asia strategy could also be made more flexible in terms of the projects and mandates that specific EU institutions in the recipient countries are authorized to accomplish. This game could be made more sophisticated by turning soft power—where Europe is stronger—into a geopolitical asset. », noted in the Letter by Dr Laumulin.

The event is held in the light of the renewed EU Strategy for Central Asia, adopted in July 2019, which sets how the EU and the countries of Central Asia can work much more closely on issues such as resilience, prosperity and regional cooperation. During the event the participants discussed in details the regional dimension of the EU Central Asia strategy and whether it was an adequate answer to the challenges of the 21st century. The paper focuses on regular interactions among EU representatives, the state authorities, civil society activists, and experts.

The full text of the Letter from Nur-Sultan available via the link:

Recognising the strategic role of Central Asia, the EU has for a long time engaged the governments of the region to help foster integration, support sustainable economic growth and promote shared prosperity. Recent modernisation efforts in the region have led to deeper co-operation with the EU on trade, inclusiveness and economic diversification. Building on these developments, the new EU Central Asia strategy was adopted by European Union member countries on 17 June 2019. Among other goals for stronger co-operation, it prioritises the improvement of resilience and prosperity of the region, including regional connectivity, the rule of law, investment attraction and private sector development.