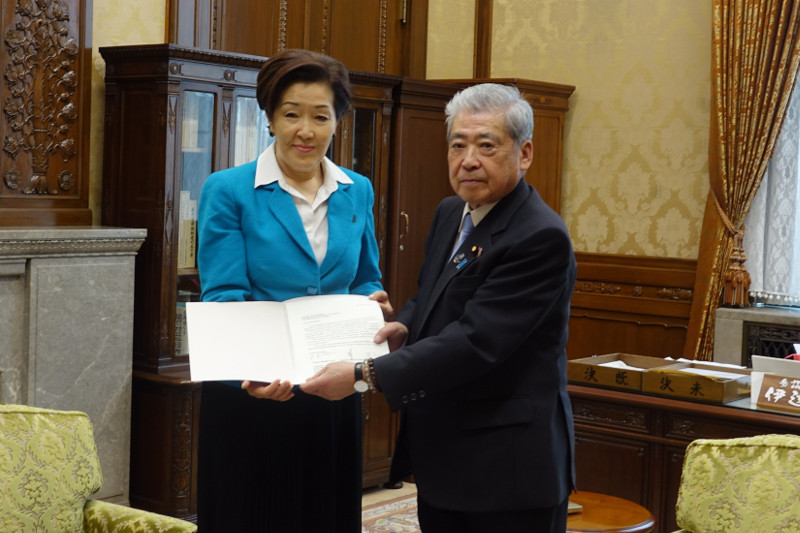 TOKYO. KAZINFORM - Gulmira Issimbayeva, Deputy Chairperson of the Majilis of the Parliament of Kazakhstan presented Chuichi Date, President of the House of Councillors of the Nation Diet (Japan's Parliament), with an official invitation to participate in the Fourth Meeting of Speakers of Eurasian Countries' Parliaments, Kazinform correspondent reports.

In turn, Chuichi Date said that Japan attaches great importance to the development of comprehensive cooperation with Kazakhstan. The Japanese politician warmly recollected the speech made by the First President of the Republic of Kazakhstan Nursultan Nazarbayev at the National Diet during an official visit to Tokyo in November 2016 (Nursultan Nazarbayev is the only leader in the post-Soviet space who addressed the members of both houses of the Japanese Parliament).

Mr. Date expressed regret over the news that the First President of Kazakhstan Nursultan Nazarbayev resigned as the Head of State. He underlined that Nursultan Nazarbayev earned respect as a leader who for 30 years achieved impressive advances in modernizing the country. At the same time, Chuichi Date expressed the hope that Kazakhstan will reach significant development heights under the leadership of President Kassym-Jomart Tokayev.

It is to be recalled the 4th Meeting of Speakers of Eurasian Countries' Parliaments themed "Greater Eurasia: Dialogue, Trust, Partnership" in Nur-Sultan is scheduled for 23-24 September 2019. It is expected that in attendance there will be representatives of parliaments of over 80 countries, as well as delegates of 16 international parliamentary organizations.