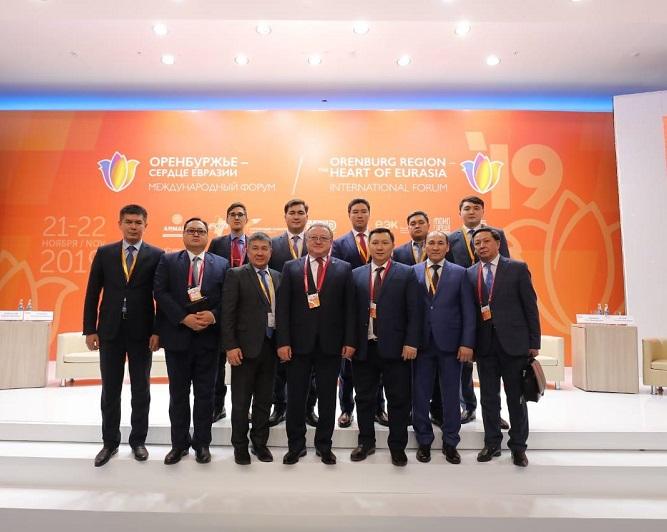 AKTOBE. KAZINFORM - The issues of cross-border cooperation were discussed by representatives of Kazakhstan and Russia during a plenary meeting of the international forum «Orenburg is the heart of Eurasia», Kazinform correspondent reports.

According to the press service of the Akim of Aktobe region, the forum brought together more than 3000 participants from Kazakhstan, Russia, Uzbekistan, Belarus and other countries.

The Governor of the Orenburg Region Denis Pasler noted that there is close interaction and implementation of projects with colleagues from border regions.

Ondasyn Urazalin, Akim of Aktobe region, emphasized that Kazakhstan and Russia are deepening regional integration. He added that Russia is the largest foreign trade partner of Aktobe region.

«Close and mutually beneficial relations have been established in the field of large business, cooperation is developing in SMEs, agriculture and the social sphere. According to the results of 8 months of the current year, trade turnover of Aktobe region and Russia amounted to USD676.3 million including export - USD245 million, import - USD431.3 million. Trade with the Orenburg region amounted to USD48.2 million USD18.2 million of which was exported and USD29.9 million was imported. The number of industries with Russian capital is rapidly growing. Thus, among 1084 foreign companies operating in our region, 534 are with Russian capital», said O. Urazalin.

However, the potential for further development of the two states’ cooperation is still great. Transport and logistics ties enhancement is of great importance.

According to Mr. Urazalin, a Roadmap for the implementation of the Agreements on trade, economic, scientific, technical, cultural and humanitarian partnership between the Governments of the Orenburg Region and the Akimat of the Aktobe Region for 2020-2022 was updated for the forum.

A Joint Action Plan to increase the throughput capacity of the border sections of roads at the Sagarchin-Zhaisan point was signed during the forum.

By the end of the plenary session the parties have inked an Agreement on cooperation.