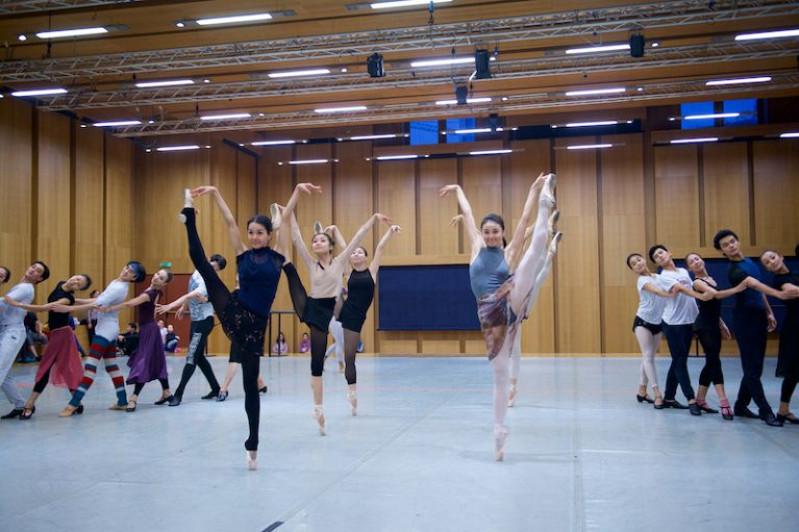 NUR-SULTAN. KAZINFORM - The lights do not go out in the Astana Opera’s ballet studios. This is where art is being created. Hours of rehearsals last until nine in the evening. The dancers are preparing for the premiere of Léo Delibes’ ballet Coppélia, Kazinform has learnt from the press service of the theater.

«I particularly like this ballet, because I myself danced it at one time. I was lucky enough to perform it together with Roland Petit himself. It is a wonderful production, unlike any other in the world. It is very compact and funny. Although not many dancers are involved in it, there is still a feeling of a full-length performance. I really love Roland Petit’s works, I consider him one of the most outstanding choreographers of the 20th century. He always has his own style, original and very talented. Despite the fact that this ballet has been running in different venues for 45 years, it still remains very popular and is staged in opera houses of all capitals. For example, Luigi Bonino came to us after the premiere of the ballet Coppélia in Munich. The production is very easy to watch, I am positive that the audience will like it,» said Altynai Asylmuratova.

«I will be performing the part of Frantz for the first time, I am very glad that it is Roland Petit’s choreographic version of this ballet which will be in our repertoire. I think that this is one of the most interesting iterations of this ballet. It is characterized by a special atmosphere, the production is filled with acting work, there is a completely different style of choreography and even the technique is distinguished by its transitions. The mise-en-scenes, adagio – everything is staged brilliantly. The Ballet Master Luigi Bonino works with us, he stages Roland Petit’s productions of in their original form, knows all the subtleties and nuances that must be reproduced in this ballet. It is very easy for us dancers to ‘step into’ this production. We have already managed to learn the ballet, now we are working on certain points,» Bakhtiyar Adamzhan said.

The Principal Dancer joked that this ballet has a lot of French humour, but the dancers have their own Kazakh humour, which will certainly come in handy when working on Coppélia.

«If you make a certain gesture with a delay of 3 seconds, then the result will be wrong. Therefore, it is important to work with partners, together we need to play out different points. Luigi Bonino helps us in many ways, he works with each dancer individually, knows how to make each of us achieve our full potential, how to convey the essence of the ballet to the viewers. We are all in anticipation of the premiere, and each of us is perfecting our character portrayals. This ballet is playful, easy, it will delight people. We want them to smile with us, laugh and think about this story,» Bakhtiyar Adamzhan concluded.

His partner is a performer of Swanilda’s part Aigerim Beketayeva, Shugyla Adepkhan will take the stage in this role on the second premiere day.

«This ballet is yet another gem! It has interesting choreography, beautiful music. There is a certain zest. Luigi Bonino pays great attention to acting skills; there were difficulties in the technical side of things too. A lot of footwork, I had to calculate every combination. Luigi Bonino talked a lot about Swanilda: she is young and coquettish. The meaning of the entire ballet is in the second act, where Swanilda pretends to be a doll, and Coppélius declares his love, laying his heart bare. I feel very sorry for him when he finds out at the end that this is all a prank. It is a great honor for me to dance with Luigi Bonino,» Aigerim Beketayeva said.

Going onstage as Coppélius after such giants as Roland Petit and Luigi Bonino is a big responsibility and at the same time a risk. It is important to present your own interpretation. What Rustem Seitbekov’s portrayal will be like, we will find out only at the premiere, but for now, the dancer is honing his skills in the rehearsal hall.

«I am happy that I will perform this part. It is not easy, as it requires both physical and emotional preparation, that is to say, acting. Even with my extensive experience, it is not easy; there are a lot of nuances and work with objects. It is necessary to place all the focal points with perfect precision. The singularity of the production is that there is a dialogue with the audience. This ballet is about love and loneliness, because Coppélius actually begins to believe in a miracle, that he breathes life into his beloved doll. I will try to convey everything that Maestro Luigi Bonino taught me. For me, this performance is very important, because I will dance my 20th season onstage,» Rustem Seitbekov noted.

In Coppélius’ Workshop, or the Other Side of the Stage

In the opera house’s workshops, the craftsmen are trying to reproduce the props, scenery and costumes of the production with perfect accuracy, just as the audience saw them at the premiere in 1975 at the Ballet National de Marseille. Victor Carare, Deputy Director for Design, Production and Building Maintenance, says that the most important thing for the opera house is achieving high quality in creating sets, props, costumes and lights.

«This is one of the first productions where Ezio Frigerio performs two roles – a set designer and a costume designer. We are doing a lot of work to recreate the original production. We pay attention to all areas, but especially the scenery, technological requirements that are relevant today. Once upon a time, set elements were made of wooden bars, plywood, and filler; today there are completely different materials that will allow the production to last a very long time. Doing what was know-how 45 years ago today is a chance for us to plunge into history and look at that time with our eyes, evaluate it. We have several solutions for creating movements of the lifts, the doll, a chair of a certain height, which will undoubtedly add visual appeal to the performance,» Victor Carare said. «One of the dolls should be very lightweight, because the soloist will dance with it. The second is mechanical, with one hand moving with a fan. Both of them are very similar, and it seems like this is the same doll. The last one – mechanical – by pressing a certain button in the final scene of the ballet, splits into parts one-at-a-time: arms, legs and head all get disjointed. However, at the next performance, it can already be put back together and once again smile at the audience from the stage. We approached the creation of costumes and prop elements very delicately, trying to preserve the colour scheme of the original sketches. I think we succeeded. Now we are at the final stage of work, the rehearsal process is actively underway. I hope we will delight the viewers with an original performance,» Victor Carare concluded.

And, of course, Léo Delibes’ music is beautiful. It is poetic, expressive, vivid and fluid. Ballet scholars note that it contains elements of symphonization, and the worlds of living human feelings and of soulless doll mechanisms are clearly contrasted in it. The composer skillfully uses leitmotifs that characterize the protagonists, which contributes to dramatic unity. And the Astana Opera Symphony Orchestra under the baton of Music Director and Conductor Arman Urazgaliyev will bring this enchanting music to life.