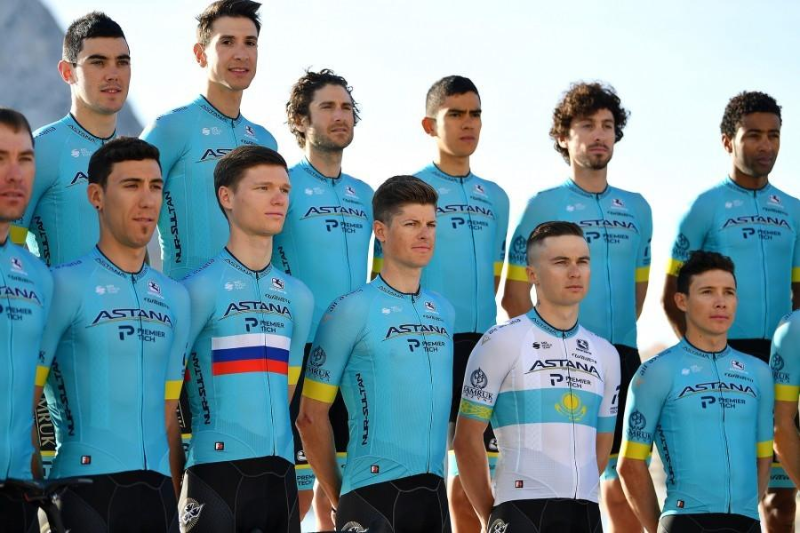 NUR-SULTAN. KAZINFORM - The Kazakh UCI WorldTour squad Astana Pro Team is preparing to come out from lockdown and to resume the 2020 cycling season according to the revised UCI calendar, which was forced to stop earlier in March due to the COVID-19 pandemic, Kazinform has learnt from the club’s press service.

Still following carefully the situation in the countries across Europe as well as around the world, the management of Astana Pro Team decided to create the first plans about resuming the season. If the current situation keeps developing in a positive way, the Kazakh team will organize two training camps in mid-July, splitting the team into two groups.

Alexandr Vinokurov, General Manager: «Fortunately, everything slowly returns to normal. We understand that for some time we will all have to live with certain restrictions, but if the tendency continues like this, I am sure that the revised calendar that was planned by the UCI will be realized. All our riders are already training on the road in 100% mode, the guys are preparing for the reopening of the season. If everything goes well, we will organize two training camps in July. One in Spain and the other one in Italy. We hope to have really good training in the middle and second part of July in order to have the best possible start in the first races».

All riders living in Spain as well as the Colombians, who are planning to come back to Europe in July, will do a training camp in Sierra Nevada, Spain. All other riders of the team will gather together in the Italian Dolomites.

Dmitriy Fofonov, Sports Manager: «In July, we have planned two training camps that will be held simultaneously in Sierra Nevada, Spain, and Livigno, Italy. We divided the team into two groups based on the athletes' training plans and logistics in order to minimize movements. So, we are systematically preparing to get out of this situation and towards the first races of this new part of the season».

Astana Pro Team is planning to restart its 2020 season with the Spanish race Vuelta a Burgos, which has been scheduled between July 28th and August 1st. It will be followed by the Italian classics (Strade Bianche, Milano-Torino and Milano-Sanremo) and the Tour de Pologne.

Dmitriy Fofonov: «At the moment, there is a calendar that looks very good. We are working closely with the race organizers and have already confirmed participation in most of the races, so we are optimistic about the future. Most of the riders are already in Europe, including almost all Kazakh riders. Only Artyom Zakharov and Dmitriy Gruzdev are still in Kazakhstan, actively training there, but they will fly to Europe as soon as it is possible. As for our Colombian guys, we have a confirmation that a charter flight will be organized for them in July. All the guys feel good, motivated and we are looking forward to the start of the competitions».

Alexandr Vinokurov: «Of course, our main goals in this shortened season are the Grand Tours. All teams will strive to prove themselves at the Tour de France, the Giro d'Italia, and the Vuelta a España, and we are not an exception. We did not change our plans, so Miguel Angel Lopez will go to the Tour as the team’s leader, while Jakob Fuglsang will lead Astana at the Giro. Also, the Kazakh National Champion Alexey Lutsenko, who is rapidly progressing in recent years, plans to perform at the Tour de France».

The leaders of Astana Pro Team about resuming the season:

Miguel Angel Lopez: «After a long time of waiting at home and training on the rollers, finally, we have the possibility to train normal outside, doing our job for 100%. We all have the hope and desire that the races will start as planned. It will be important for us, for our team and for our sponsors. So, I’m working hard now, trying to come back in good shape and I’m really looking forward to coming back to Europe and to see my teammates at the training camp before the start of the season. I’m really motivated and excited about my debut at the Tour de France and I will try to prepare for it as well as possible. It will be a big step ahead in my career».

Jakob Fuglsang: «I look forward to starting racing again, and I hope that the racing calendar that we have now will go on. I’m happy to start my season with the Strade Bianche. I’m also looking forward to the training camp in July, it’s going to be good to get together at the altitude camp. It will help a lot to start the season in a good way. For sure, it will be a fast and furious one after so many months at home. We have to be ready to go full gas right from the beginning. I am happy to get a leading role for the Giro d’Italia, it’s a big opportunity for me. It was my main goal, let’s say, in the original program, and I’m happy that it’s still like that. I really look forward to being the team’s leader at the Giro».

Alexey Lutsenko: «I’m looking forward to the restart of the season, and now I’m working hard to get in a good shape for my first races. An unusual season is waiting for us, from August to November there will be a lot of races and after a long break, everyone will strive to prove themselves. There will be no easy or non-important races at all. I think that at every race we will see a hard fight for results, so we must be ready. I’ll start the season with Strade Bianche, and I would like to approach this race at 100%. It’s great that the team is planning to organize a training camp before the restart of the season: this will help us to get to a good level. This year I plan to take part in the Tour de France, it will be a very difficult race, the mountains will be there already in the first stages, so an interesting fight will be waiting for us. I would like to show myself in this great race».