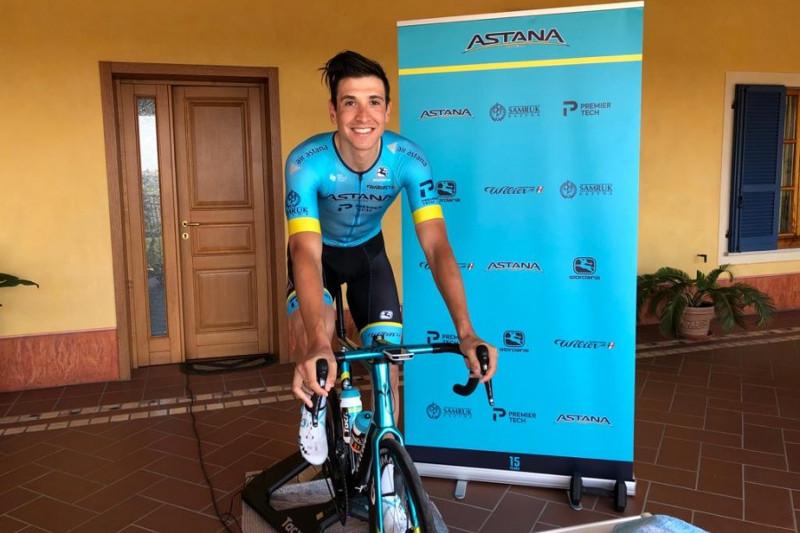 NUR-SULTAN. KAZINFORM The Kazakh team wins the first edition of the Giro d’Italia Virtual. After seven stages Astana Pro Team finished the race with two stage wins as well as three second and third places and a lead of 49:57 minutes.

The Kazakh team got the virtual Maglia Rosa on day one and were able to retain it until the final stage.

From the 18th of April until the 9th of May, every Wednesday and Saturday, the riders fought virtually at the «Giro Virtual» for the Maglia Rosa. Every stage of the seven stages were the final parts of the original stages of the Corsa Rosa 2020, the Team’s official website reads.

The virtual race started with a stage finishing in Tortoreto followed by Cesenatico, San Daniele del Friuli further the race went up to the Madonna di Campiglio towards Laghi di Cancano up to Sestriere. And had its big showdown with a virtual time trial to Milano.

The opening stage covered 32,1km and Astana Pro Team rider Alexey Lutsenko put in the fastest time. He took the win with a time of 44 minutes and 41 seconds. Teammate Davide Martinelli finished in third place, after 50:23 minutes.

The second stage took the riders over 32,7 virtual kilometers through the city of Cesenatico. Omar Fraile was able to finish the course in 1:00:48, taking a strong second place and defended the Maglia Rosa for the Kazakh team. Hugo Houle finished the second race day in sixth place.

Day three of the Giro Virtual saw the riders climbing over the Monte di Ragogna on a 26.9km demanding course. The Italian Davide Martinelli crossed the virtual finish line in third place, with a time of 47:47, while teammate Yevgeniy Gidich came in tenth.

On Wednesday the 29th of April, the fourth race day of the Giro d’Italia Virtual saw the first virtual summit finish of the race. After 25,9km the riders headed up to the Madonna di Campiglio, where Gorka Izagirre took the second place after 59:03 minutes. Alex Aranburu finished the race in tenth place.

Jakob Fuglsang and Ion Izagirre started stage 5 to secure the Maglia Rosa for the team. The profile showed 30 kilometers from Pinzolo to Laghi di Cancano, which had an average of 6.8% on the last 8 kilometers. The Danish rider put in a strong performance, taking second, 39 seconds down on the stage winner. Ion Izagirre was able to finish in sixth place.

The penultimate stage of the Giro Virtual took the riders from Alba up to Sestriere over 31,5 kilometers. Alexey Lutsenko and Jakob Fuglsang were motivated to build up the advantage for the team in the overall ranking. With a time of 1:06:04 Jakob Fuglsang was the fastest and took the second stage win for the team, while Alexey Lutsenko completed the podium with a third place.

«We are really happy with the overall win, even if it was a virtual one. We got the virtual Maglia Rosa on day one and were able to retain it until the final stage, that is a nice feeling. Of course, it is completely different than to ride the Giro on the roads. The stages might have been short but super intense so it was a great training for me. For sure I will include that in my upcoming training schedule, but I still prefer riding and racing on the roads. However, it was the perfect opportunity to have a tough training and also to show our colors and sponsors, who are supporting us in these difficult times. We worked as a team together, had support from our teammates and coaches in our WhatsApp group, and motivated each other. All in all, it was a nice experience and the organization did a great job and we are happy to bring this win to the main partner Samruk-Kazyna, all sponsors and our fans around the world,» said Jakob Fuglsang.

«It is nice to have won the Giro Virtual. It might have been a virtual race, nevertheless, it was not an easy one. The stages were on the paper short but intense. Our riders gave their all and we all worked together and took our participation seriously. Especially, for our sponsors we are happy to have been able to give them a platform to be seen. We are grateful for our main partner Samruk-Kazyna as well as all other sponsors, who are supporting us in this difficult time, we are all living right now. Therefore, the virtual race was a great opportunity to show our sponsors and our riders had a kind of race feeling again. But also, the organization of the Giro d’Italia did a great race, the organization was perfect.,» Dmitriy Fofonov, Team Manager, said.