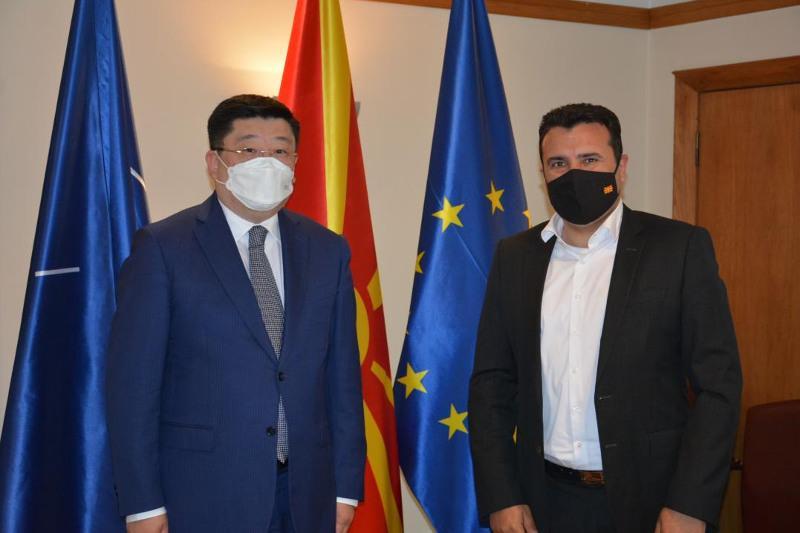 SKOPJE. KAZINFORM - The Ambassador of Kazakhstan Mr. Zhanibek Abdrashov, in the framework of his working visit to the Republic of North Macedonia, met with the Prime Minister Mr.Zoran Zaev, Speaker of the Assembly (Parliament) Mr. Talat Xhaferi, Vice Prime Minister Mr. Fatmir Bytyqi, Minister of Economy Kreshnik Bekteshi, Head of the Macedonian Delegation to the OSCE Parliamentary Assembly Mr. Igor Yanushev and Head of the Parliamentary Friendship Group for Cooperation with the Mazhilis of the Parliament of the Republic of Kazakhstan Mr. Enes Ibrahim, as well as other meetings at the Ministry of Foreign Affairs of North Macedonia.

According to the press service of the Kazakh MFA, at the meeting with the Head of Government, the parties discussed the current situation and perspectives for the development of bilateral cooperation, as well as international issues, including the situation in the Balkan region. The Ambassador of Kazakhstan informed the Prime Minister about the socio-economic situation in Kazakhstan, as well as about the measures to further reform of the country and development of Kazakhstani society.

In turn, the Prime Minister assured that North Macedonia intends to further actively strengthen the political dialogue and develop trade economic relations with Kazakhstan on a mutually beneficial basis.

The development of inter-parliamentary cooperation was the subject of the meeting of the Head of the diplomatic mission in the Parliament of North Macedonia. The parties noted their interest in intensifying contacts between the legislative bodies, including the friendship group of deputies of the two countries in order to exchange experience on strengthening the rule of law.

Issues of interaction and deepening of relations between our countries in the trade and economic sphere were discussed with the Vice Prime Minister for Economic Affairs F. Betichi. In particular, special emphasis was based on the development of interaction in agriculture, energy, as well as on the regional and transport cooperation.

The Macedonian side expressed its interest in taking bilateral relations to a qualitatively new level, considering Kazakhstan as a key partner in Central Asia.

The holding of the first meeting of the Kazakh-Macedonian Intergovernmental Commission on Trade and Economic Cooperation in Skopje this year was the main topic of the meeting of the Kazakh diplomat with the Minister of Economy, which should give impetus to the development of trade and business relations between the two countries.

Additionally, within the framework of attracting investments to Kazakhstan, the Kazakh diplomat held a number of meetings with business circles of North Macedonia.