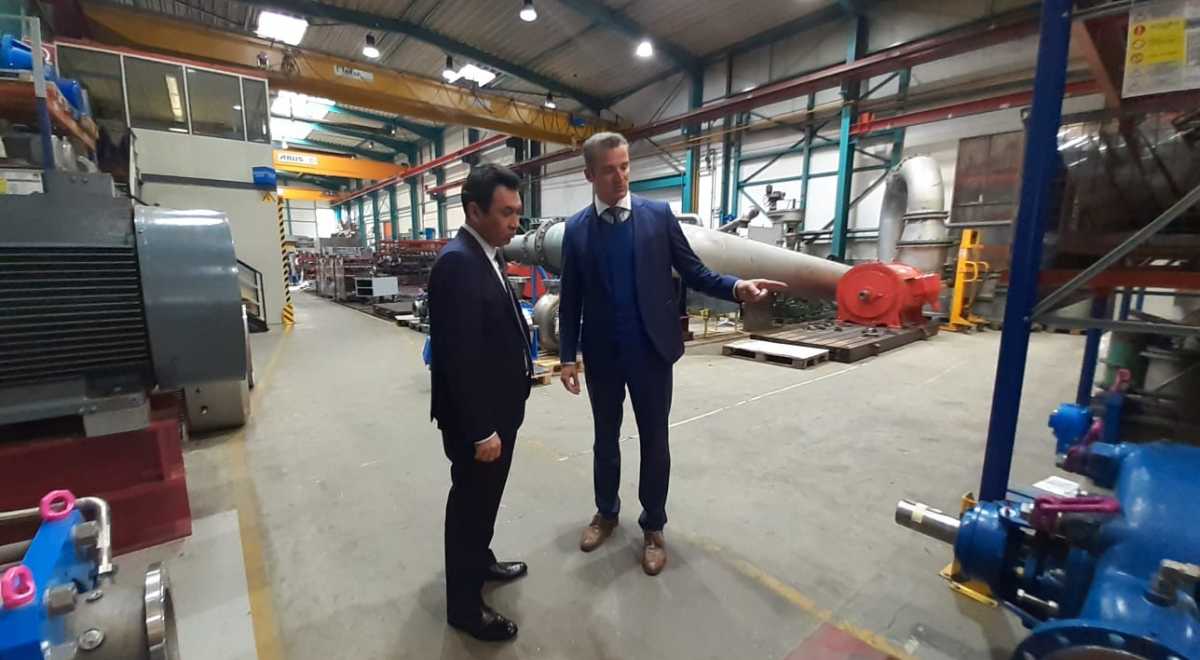 DORTMUND. KAZINFORM Kazakhstan’s Ambassador to Germany Dauren Karipov is on a working visit to Dortmund, where he has met with the heads of WILO SE and Düchting Pumpen Maschinenfabrik GmbH, as well as the local chamber of commerce, the press service of the Kazakh MFA informs.

During the meeting at WILO headquarters, the Ambassador congratulated the Chairman of the Board and Company President Oliver Hermes with his recent election to the post of Chairman of the Board of the German Eastern Business Association (OAOEV). In underscoring that this decision fully reflects the respect and trust placed on Mr. Hermes as a professional manager, the Kazakh diplomat expressed confidence in the development of productive cooperation with the OAOEV, which is Kazakhstan’s main partner for interactions with the German business community.

Moreover, the Kazakh diplomat noted that WILO is one of our country’s exemplary investors. Over the years, the company has been making direct investments in the Kazakh economy, providing capital investment for the benefit of Kazakhstan's development and creating enterprises for the production of high-value-added goods.

During the meeting, which was also attended by Christian Erich, the Deputy Managing Director of the Dortmund Chamber of Commerce, the sides discussed prospects for deepening trade, economic and investment cooperation between Kazakhstan and Germany. Notably, representatives of the German business delegation stated that since the settlement of a number of bilateral cooperation issues they have been actively developing direct contacts with Kazakh entrepreneurs, implementing joint mutually beneficial projects and investing in various sectors of our country’s economy.

The Ambassador briefed the meeting participants on investment and export opportunities in Kazakhstan, noting the country’s favorable geostrategic location at the intersection of major trade routes. In addition, he spoke of measures to improve the business climate and increase the investment attractiveness of the country, support for foreign investors, and the development of direct dialogue between public authorities and investors.

Mr. Karipov also suggested holding joint events on a regular basis in order to inform regional entrepreneurs about investment opportunities in Kazakhstan, as well as about international legal acts adopted by the EAEU in the field of agriculture, customs and technical regulation, etc. In addition, the Ambassador suggested establishing partnerships between Dortmund and the regions of Kazakhstan.

During his meeting with the Managing Director of Düchting Pumpen Maschinenfabrik, Carsten Duchting, the Ambassador discussed further cooperation with Kazakhstan, as well as the possibility of increasing the firm’s market presence through the opening of a joint venture to manufacture and service the supplied equipment.

WILO SE is a world leader in the production and supply of high-tech pumping systems. This year the company celebrates 20 years of presence on the Kazakh market, during which it has delivered more than half a million pumps, and opened 2 WILO Central Asia branch offices in Nur-Sultan and Ust-Kamenogorsk. A milestone event was the opening in 2018 of an administrative and production facility, which serves customers from Central Asia and the Caucasus.

Düchting Pumpen Maschinenfabrik is a family-owned business founded in 1938. Currently, the company produces pumping equipment, mainly for the mining industry, and supplies various countries around the world.