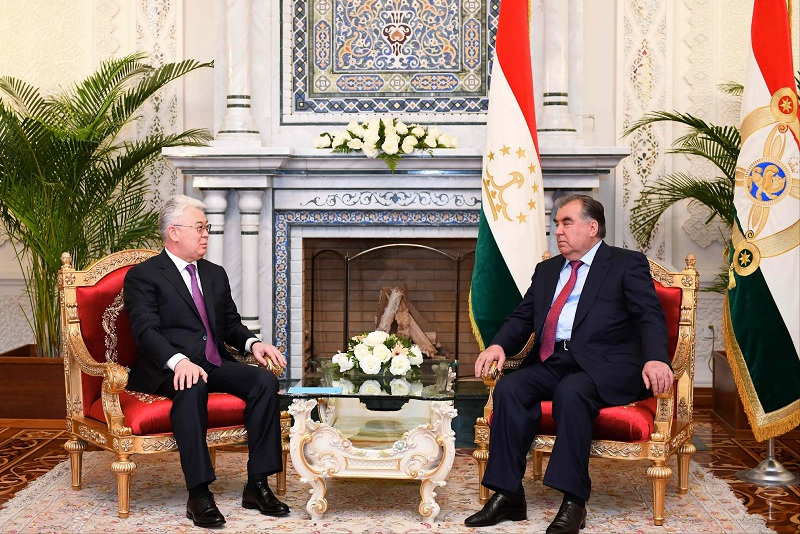 DUSHANBE. KAZINFORM On the sidelines of the 7th Conference of the Foreign Affairs Ministers of Central Asia+Japan Dialogue, Foreign Minister of Kazakhstan Beibut Atamkulov met with President of Tajikistan Emomali Rahmon, the press service of the Kazakh MFA says.

At the meeting, the Kazakh FM noted that Tajikistan had been a reliable friend and important strategic partner in Central Asia. "We appreciate the existing warm relations between our countries and leaders," said Atamkulov.

The sides discussed the oncoming 5th Summit of the Conference on Interaction and Confidence Building Measures in Asia slated for June in Dushanbe. "Kazakhstan expresses gratitude to the Tajik side for its activity as the presiding country and is ready to provide all-round support to Tajikistan during its chairmanship," the Kazakh Minister added.

President of Tajikistan Emomali Rahmon highlighted the contribution of the First President of Kazakhstan-Leader of Nation to the development both of Kazakhstan and the entire Central Asian region.

He stressed that he had known President Kassym-Jomart Tokayev as a well-experienced diplomat and professional for more than 20 years. He wished good and transparent presidential elections the results of which "will undoubtedly benefit the Kazakh people."

Kazakh-Tajik relations have seen boost in recent years. Political ties are strengthening, trade turnover indicators are rising. In 2018, bilateral commodity turnover comprised $845.2mn that is 8.2% higher compared to the same period of the last year.

Kazakh Export company plans to open its representative office in the Tajik capital on May 20.

The two countries have a great potential in the development of transport and transit potential. It was proposed to continue working on implementation of a flexible tariff policy for the transportation of goods in Tajik and Kazakh territories.

Kazakh-Tajik cooperation is based on more than 80 bilateral documents which cover almost all areas of interaction.