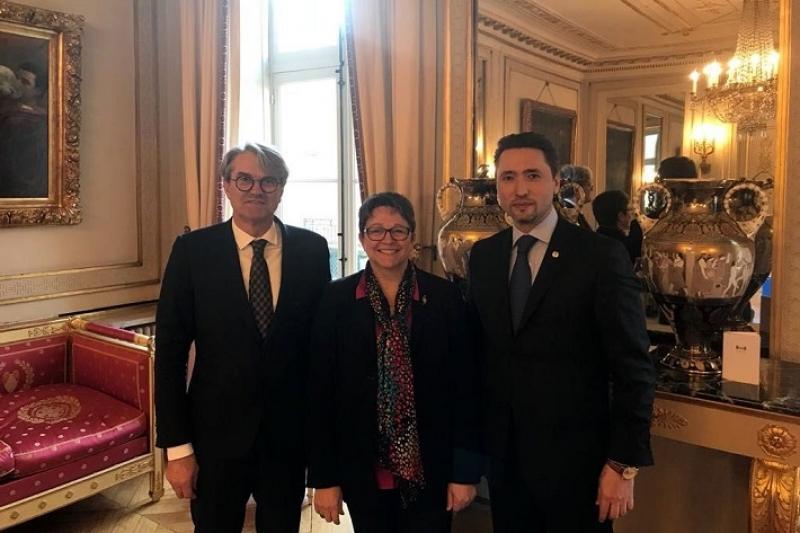 ASTANA. KAZINFORM In Paris, the Ambassador of Kazakhstan to France Zhan Galiyev held a meeting with Chairman of the France-Kazakhstan interparliamentary friendship group Pierre Cabaré, the press service of the Kazakh MFA reports.

The meeting was also attended by the Deputy Speaker of the National Assembly Carole Bureau-Bonnard, a member of the Foreign Affairs Committee Annie Chapelier, as well as members of the secretariat of the friendship group and the Embassy of Kazakhstan.

The sides exchanged views on the topical issues of international politics, as well as the state and prospects of the Kazakh-French strategic partnership, the 10th anniversary of which will be marked in June 2018. Speaking about the inter-parliamentary and decentralized cooperation, the sides noted broad opportunities, the convergence of views and approaches.

The French deputies praised the dynamic development and progressive reforms taking place in Kazakhstan. In particular, members of the National Assembly noted successes in strengthening the principles of democracy and human rights.

Mme Carole Bureau-Bonnard and Annie Chapelier also noted Kazakhstan's peacekeeping efforts as well as the country's leadership in the non-proliferation of WMD and banning of nuclear tests. They stressed the importance of active measures aimed at restoring the environment in the zones of man-made disasters, such as the Aral Sea Basin and the former Semipalatinsk Test Site.

French parliamentarians were particularly interested in the guidelines outlined by President Nazarbayev in his January Address to the Nation, and Ambassador Galiyev spoke about the opportunities for cooperation within the framework of their implementation.

In his turn, Pierre Cabaré confirmed his intention to visit Kazakhstan as the head of the friendship group later this year. According to him, Kazakhstan is attractive to the French not only as a reliable economic and political partner but also as an interesting, little-known tourist destination, as a country with a rich and diverse culture that is located along the Great Silk Road.

As previously reported, the Agreement on Enhanced Partnership and Cooperation between the Republic of Kazakhstan and the European Union was approved by France's National Assembly on December 18, 2017, and Senate on February 15. The document is scheduled for Presidential approval in the near future.