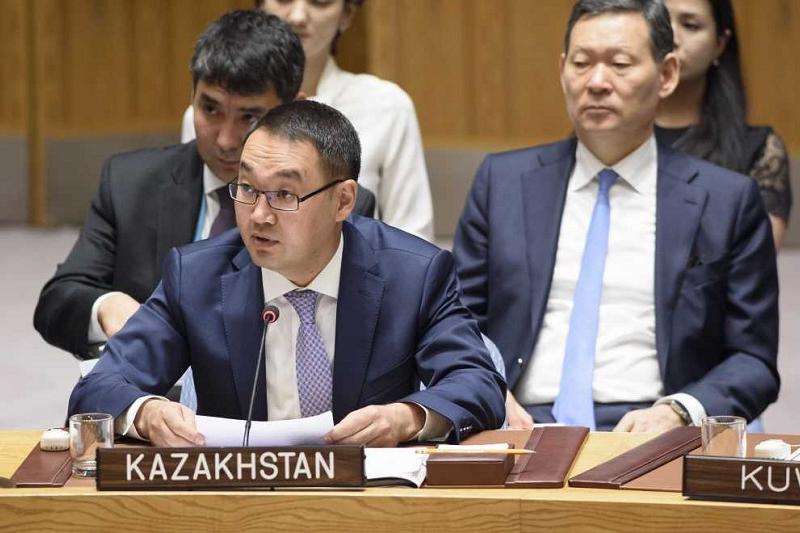 ASTANA. KAZINFORM - "Climate change is a 'threat multiplier' as it can result in poverty, food insecurity, illegal migration, social instability and bitter conflicts", according to the Deputy Minister of Foreign Affairs of Kazakhstan, His Excellency Yerzhan Ashikbayev, on 11 July, at the open debate of the United Nations Security Council dedicated to Understanding and Addressing Climate-related Security Risks, Kazinform has learnt from the Kazakh MFA's press service.

In his statement, the Deputy Foreign Minister noted that the problem of climate change was a central theme throughout the world community, which had significant economic, social and environmental consequences. Kazakhstan is ready to unite with other Members States in joint multilateral action for global security.

"Kazakhstan and the entire Central Asian region has its own tragic experience with dying Aral Sea. This environmental disaster has brought many challenges for the population and nature in neighboring states, affecting more than 60 million people", Ashikbayev said. He then elaborated on the various measures undertaken to address this alarming concern, within the framework of the International Fund for Saving the Aral Sea, which had resulted in some notable positive improvements of the situation.

Highlighting that climate change mitigation is one of the priorities of the Government of Kazakhstan, His Excellency underscored the significant steps taken to reduce the amount of hazardous emissions, as well as to move towards a full transition to renewable energy sources by 2050. The International Center for Green Technologies in Astana, which has been established on the site of Astana Expo 2017, will be crucial in furthering this process.

The event chaired by Minister for Foreign Affairs of Sweden Margot Wallström, was addressed by President of the Republic of Nauru Baron Vaca, UN Deputy Secretary-General Amina Mohammed, the Minister of Water Resources of Iraq Hassan Janabi and others.

In New York, Mr. Ashikbayev also participated in the forum titled, "Contribution of Transboundary Water Cooperation to Achieving the Sustainable Development Goals". He shared the experience of Kazakhstan in the use of transboundary rivers with its neighboring countries in Central Asia, and also Russia and China. In addition, he also expressed support for a comprehensive consideration and application of the international water law to resolve the threat posed by the shrinking of the Aral Sea.

Deputy Foreign Minister Ashikbayev also stated that Astana attaches great importance to the Meeting of the Parties to the Water Convention of the United Nations Economic Commission for Europe, to be held from 10 to 12 October, later this year, which was expected to attended by more than 400 representatives of governments, international non-governmental organizations and water experts from all around the world.