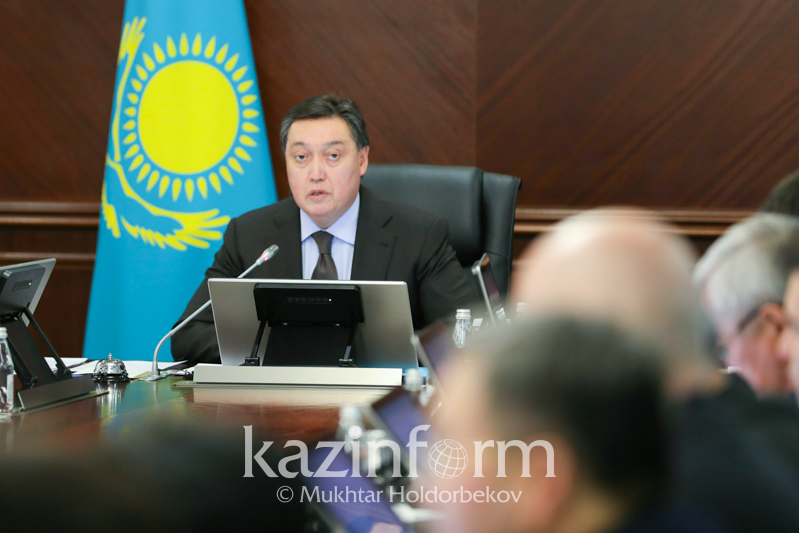 NUR-SULTAN. KAZINFORM - The Prime Minister of the Republic of Kazakhstan, Askar Mamin, has instructed to develop and approve the next stage of the Business Roadmap by 1 September 2019, Kazinform correspondent reports.

Addressing the Government session, Askar Mamin recalled that the Cabinet faces the task of strengthening the role of small and medium-sized enterprises to have its share in the country's economy reach 35% by 2025.

"The program has proved effective and is one of the sought-after effective tools for the country's business community. In general, the leaders in SME development are the cities of Almaty and Nur-Sultan as well as Turkestan region. The lagging regions need to step up work in these areas," the Head of Cabinet emphasized.

Besides, Askar Mamin underlined the need for active involvement in the program of Economy of Simple Things. "KZT 600 billion has been allocated to this end. To date, including to the second-tier banks, entrepreneurs have submitted 350 applications totaling KZT 310 billion. It is necessary to speed up and closely monitor the utilization of the funds allocated. In this respect, I entrust the Ministry of Industry and Infrastructure Development of the Republic of Kazakhstan jointly with the Atameken National Chamber of Entrepreneurs and government agencies to intensify the operation of the project office. The Ministry of National Economy is to submit a draft resolution approving a mechanism for guaranteeing the priority projects within the framework of the economy of simple things and granting the right to working capital financing up to 50% of the loan amount," said Askar Mamin.

"The Shymkent City administration received KZT 600 million for subsidies and KZT 250 million for guaranteeing of projects. The Atyrau region administration also received KZT 600 million for subsidies. The National Chamber of Entrepreneurs should revise the format of training at the business school to bolster the effect and increase the number of people who have set up their own businesses. Through the State-of-the-Nation Address, Yelbasy instructed the Government to develop and approve the next stage of the 2025 Business Roadmap by September 1, 2019. Alikhan Askhanovich [Smailov - First Deputy Prime Minister - Minister of Finance), you are to exercise control in this regard," he concluded.