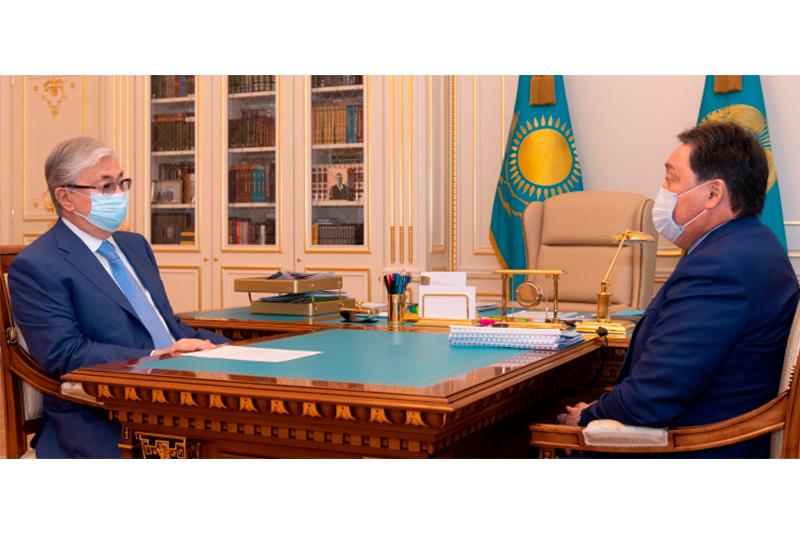 NUR-SULTAN. KAZINFORM - Kassym-Jomart Tokayev heard a report on the epidemiological situation, the course of vaccination of the population, as well as on pressing issues of socio-economic development of the country, Kazinform cites the Akorda press service.

According the Prime Minister, the epidemiological situation in the country as stabilized. Kazakhstan has moved from the «red» to the «yellow» zone in terms of spreading Covid-19. The virus’ reproductive index is 0.94. Infectious diseases sections are filled by 33%, intensive care units-by 25%. Vaccination rates are increasing. To date, 3 million vaccinations have been made in Kazakhstan, of which 2 million people got the first dose of vaccine, and nearly 1 million people got the second dose.

The Head of State was also presented with a report on the implementation of the pilot regime of the new system of civil servants’ remuneration. The participants of the pilot project in 2018 were the Civil Service Affairs Agency, the Anti-Corruption Agency, the Justice Ministry, and akimats of a number of regions. As a result of the experiment, the turnover of personnel in the state bodies participating in the project has decreased from 4.9% to 3.5%, the attractiveness of the civil service has increased, and the wage disparity in the central state bodies and the regions has been reduced from 70% to 16 %.

The President instructed to scale up this project in local executive bodies, as well as in central state bodies. At the same time, work should be continued to gradually reducing the number of civil servants and optimizing the organizational structure of the state apparatus. He considers it important to use the funds released during the restructuring to increase wages.

The measures to increasing the inflow of foreign and domestic investment, strengthening the SME potential, further diversifying the structure of the economy through the growth and development of the manufacturing sector, and other pressing issues of socio-economic development were discussed during the meeting.