U.S. Secretary of State to pay official visit to Kazakhstan 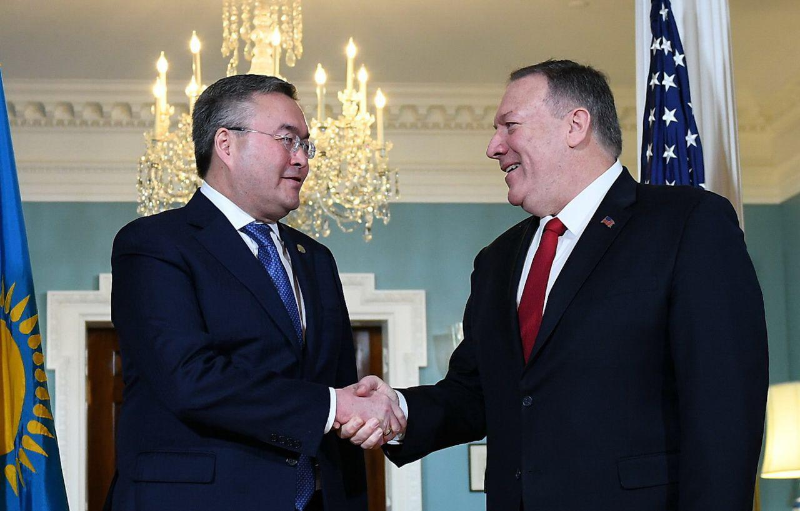 NUR-SULTAN. KAZINFORM - U.S. Secretary of State Mike Pompeo is expected to pay an official visit to Kazakhstan, Kazinform has learnt from Aibek Smadiyarov, official spokesperson of the Ministry of Foreign Affairs of Kazakhstan.

Earlier it was reported that Minister of Foreign Affairs of Kazakhstan Mukhtar Tileuberdi paid the official visit to the U.S. on invitation of U.S. Secretary of State Mike Pompeo.

During the visit, Minister Tileuberdi held bilateral talks with Secretary Pompeo, met with the leadership of the U.S. National Security Council and U.S. congressmen as well as visited the headquarters of the World Bank in Washington.

At the headquarters, the Kazakh Foreign Minister met with World Bank Vice President for Europe and Central Asia Cyril Muller to discuss relevant issued of bilateral cooperation between Kazakhstan and financial institutes of the bank. According to Muller, the Board of Directors of the World Bank has supported the country partnership strategy between the World Bank and Kazakhstan for 2020-2025. The parties also touched upon the joint project in the area of agriculture development for 2020-2024.

According to the spokesperson, in the course of the talks in Washington Minister Tileuberdi and his American colleague discussed a wide range of issues. «As you know, Kazakhstan and the U.S. have ramped up their bilateral relations recently. The American side has been manifesting strong interest. Kazakhstan not without good reason is the only country in the CIS space with which the U.S. enjoys expanded strategic partnership characterized by multi-faceted cooperation across the entire spectrum of bilateral relations,» Smadiyarov noted.

«One of the outcomes of Minister Tileuberdi’s visit to the U.S. is that U.S. Secretary of State Mike Pompeo has accepted his invitation and will pay an official visit to Kazakhstan in early 2020. We’ve already started preparations for the visit. The visit agenda is expected to be busy,» he added.

In the course of his visit to the U.S. in September President of Kazakhstan Kassym-Jomart Tokayev held talks with U.S. politicians and experts. During the talks the Head of State talked in detail about the current state and prospects of Kazakhstan-U.S. relations, key priorities of Kazakhstan’s foreign policy, and trade and economic and investment potential of the country.

Prime Minister of Kazakhstan Askar Mamin visited the U.S. this month. Within the framework of his working visit, Prime Minister Mamin reached agreements with the leaders of U.S. agribusiness who agreed to open meat processing enterprises in Kazakhstan.