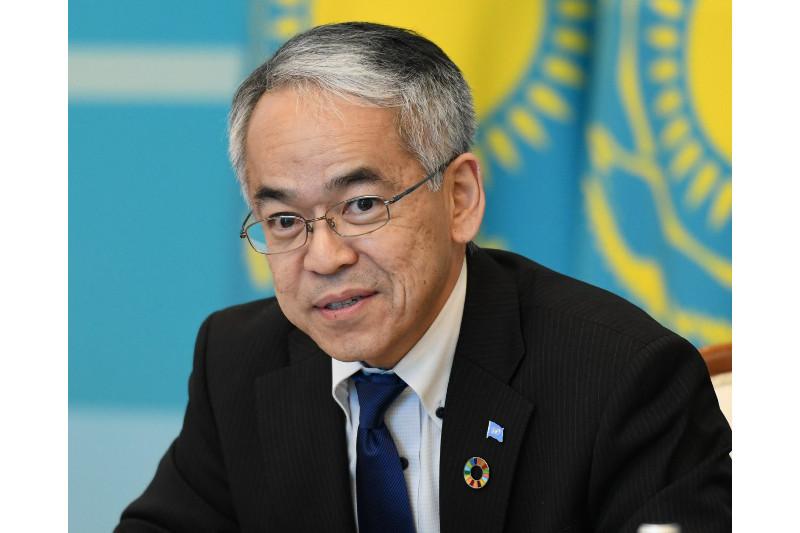 NUR-SULTAN. KAZINFORM Today at the briefing on «UN and Kazakhstan: Together towards Sustainable Future» held in the Ministry of Foreign Affairs, UN Resident Coordinator for Kazakhstan Norimasa Shimomura spoke on Kazakhstan’s contribution to the Organization, Kazinform correspondent reports.

«I have always highly estimated Kazakhstan’s contribution to the implementation of its international vision through the UN prism. Kazakhstan is actively involved in denuclearization, peace-building efforts. The country assumes global responsibility as a non-permanent member of the UN Security Council in 2017-2018. Kazakhstan actively promotes sustainable development by organizing the Astana EXPO-2017,» Norimasa Shimomura said.

«The Sustainable Development Agenda 2030 was adopted by global leaders in 2015. The Agenda includes 17 SDGs aimed at ensuring development in our countries. We also know that SDGs offer the best measures for regulation of conflicts as well as for the identification of the main causes of conflicts and violence. With the consideration of this paradigm, the UN system is aimed at the support of the member countries in achievement of development goals. Nevertheless, the member states and the Secretary General’s Office see that the UN system does no fully comply with our goals,» the speaker said.

In this regard, the UN Coordinator reminded that the Secretary General of the Organization had already began the process of reforming the UN system in the areas of peace and security, management and development.

«In this context, the UN General Assembly adopted the resolution #72279 on reforming the UN system. Key priorities have been defined at the global, regional and country levels. At the country level, this reform requires that the UN member countries, funds and UN programme offices work more closely and effectively under the strong leadership of the UN coordinators,» Mr. Shimomura concluded.