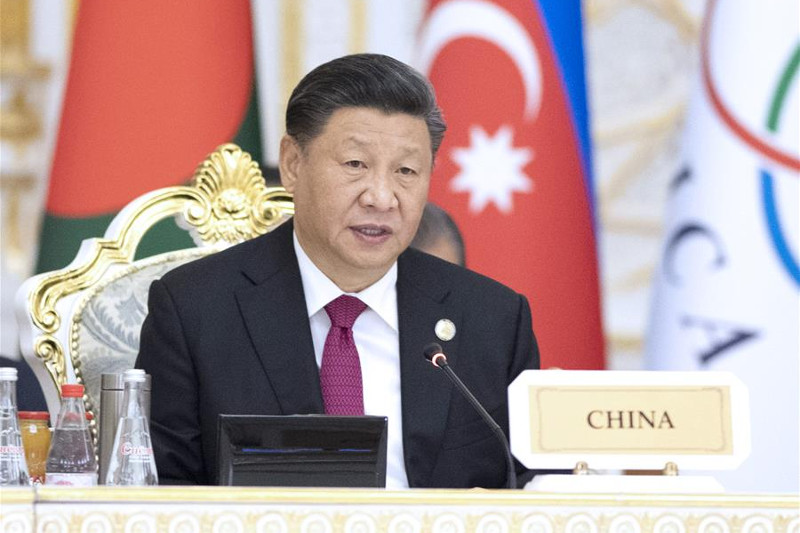 DUSHANBE. KAZINFORM Chinese President Xi Jinping on Saturday urged Asian countries and their partners to join hands in opening up new prospects for Asian security and development under new circumstances.

Addressing the fifth summit of the Conference on Interaction and Confidence Building Measures in Asia (CICA) held in Tajikistan, Xi called on CICA members to build an Asia featuring mutual respect and trust, security and stability, development and prosperity, openness and inclusiveness, as well as cooperation and innovation, Xinhua reports.

China will steadfastly pursue a peaceful development path, stick to opening up and all-win approaches, uphold multilateralism, and work together with all sides to create a better future for Asia and the world, said the Chinese president.

In his address, Xi hailed the CICA's positive contributions to promoting peace and development in Asia since its establishment 27 years ago, saying that the mechanism has been committed to increasing mutual trust and collaboration among member countries and safeguarding regional security and stability.

Xi recalled that on the 2014 CICA Shanghai summit, he put forward a new vision of common, comprehensive, cooperative and sustainable security, and proposed exploring a new security and development path that fits Asian features and the common interests of relevant countries, which received positive responses from various parties.

China stands ready to work with all sides to deepen cooperation in various fields and push forward the CICA process onto new stages, he said.

Calling Asia one of the most dynamic and most promising regions in the world, Xi said Asian countries also face common challenges including insufficient political mutual trust, imbalanced economic development, and outstanding security and governance issues, and thus there is a long way to go to realize long-lasting peace and shared prosperity.

Hailing the progress made by Asian countries in building an Asian community with a shared future in the past few years, Xi encouraged CICA members to hold on to their goals, jointly seize opportunities and address challenges, and make concerted efforts in opening up new prospects for Asian security and development under the new circumstances.

Xi said that building an Asia featuring mutual respect and mutual trust is CICA members' shared expectation, calling on them to adhere to the purposes and principles of the UN Charter, respect each other's sovereignty, independence and territorial integrity, as well as their respective choice of political systems and development paths.

Noting that building a safe and stable Asia is a common goal of regional countries, Xi called for dialogue rather than confrontation, and partnership instead of alliance among CICA members.